The Ayurvedic and Siddha systems of medicine have indigo as a plant with therapeutic properties that are effective in the treatment of vertigo, palpitations of the heart, asthma, gout, rheumatoid arthritis, constipation, and hair-related maladies. The root and leaves of the plant are used by Ayurveda to cure hepatitis, jaundice, anaemia, worm infestations, and urinary complications. 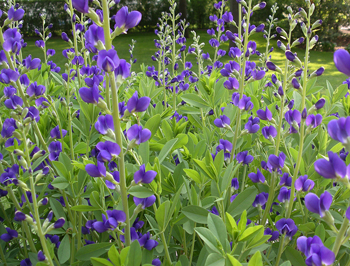 One of the first original sources of the indigo dye, Indigofera tinctoria is a plant that thrives naturally in tropical and temperate Asia, as well as parts of Africa. The origin of the plant and its native habitat is not known as a result of its worldwide cultivation for many centuries. The plant has light green pinnate leaves and pink or violet flowers. In India, the indigo plant is found in the dry forests of South India, as well as those of Rajasthan, Punjab, Maharashtra, and Orissa.

The Indigo plant contains a glycoside called indican, which yields indigo when subjected to acid hydrolysis and aerial oxidation. Other constituents of the whole plant include indigotine, indiruben, galactomannan (composed of galactose and mannose), 2.5% of alkaloids, rotenoids and flavanoids, saponins, quinines, sterols or tri-terpenes, and tannins. The leaves and aerial parts of the plant yield alkaloids, flavonoids, carbohydrates, glycosides, tannins, terpeniods, phenols and a rare flavanol glycoside. There are no saponins and steroids in the methanolic extract of the leaves. The seeds yield a water soluble galactomannan.

Indigo has been found through research to prevent and cure following health disorders: